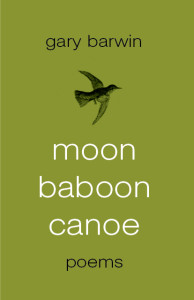 Gary Barwin’s imagination begins its weird & wild peregrinations a little beyond the world the realist eye sees. One aspect of surrealism as he practices it is speed of transformation: the imagination caught in the rapids of a river of images, fraught & freighted.The poems shift gear so quickly, one is left behind, staggering along the side of the read.

Barwin achieves his speedy shifts of perspective & tone mostly across short lines here (although there are a few poems like ‘eclogging,’ ‘psalm,’ & ‘animal intelligence’ that stretch out a bit & achieve a whole other poetic rhetoric, especially the first with its braggart blaggardly over-the-top wordplay). More usually, Barwin disperses oppositions across the line breaks, as in ‘postcard,’ where the ‘I’ puts ‘a postcard from my mother’ ‘under the lens’ of ‘the microscope’ that is ‘a gift from my father’ in order to examine it. The card shows ‘the Brockdan Motel, 1973’; & ‘I look up close at the window / and you’re in there’ or are you? The poem takes us into dream country & eventually admits, ‘you wren’t really there / in the window // of the Brockdan Motel — / under the microscope // you are coloured dots / fields of inky texture’ & ‘I’ am something altogether else & elsewhere. And his is how these poems proceed. As ‘a squirrel considers the sky’ puts it, ‘wisecracks / then winter.’

Barwin has a sense of (often very dark) humour, & this plays well with the shifty transformations he puts his various figures through. Watch the stops & starts of meaning between lines & stanzas in ‘spring,’ for instance: ‘Anne Frank now my grandmother’s age / sings the hummingbirds // return to where the hummingbirds / belong in front of my house kids // between parked cars / my daughter reads // books always an empty coffin / open’. Or see how he makes even an accordion interesting in ‘push and pull.’

In the long ‘woodland road with travellers,’ he ekphrastically improvises on a theme by Breughel, what the mind makes of what the eye sees on that canvas, allowing only the briefest line in the final section to remind us that this is all about a painting, a further artifice on which this one is constructed. There is a politicized darkness behind many of the later poems in moon baboon canoe, some of it tied to the devoted ignorance of so much of the polity. Indeed, although ‘inside,’ his Stephen Harper poem, is a jape, it concludes with a sharp slap meant to wake its reader to just how small he has made the country & us its citizens. We can laugh but only embarrassedly.

Language plays its sly games throughout moon baboon canoe: ‘injured by song / or inured to it / strangers are fossils / stethoscopes with no eyes’. Nevertheless, ‘an experienced guide can follow / 8 tracks through the city / the way a scientist follows / an atom’s breath’. Gary Barwin is our guide in moon baboon canoe; follow all 8 tracks & be rewarded.

This entry was posted in Poetry and tagged Gary Barwin. Bookmark the permalink.